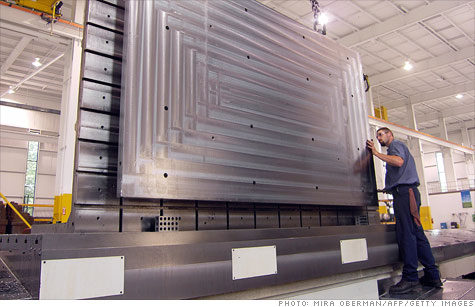 NEW YORK (CNNMoney) — What’s uncool about a $100,000 factory job? These days not much. In fact, factory jobs — once considered back-breaking and low-paying — have become high-tech and high-salaried.

“When I was an apprentice in the late ’70s, kids were dying to get into manufacturing. There were plenty of factory jobs,” said Joe Sedlak, a machinist who owns the Chesapeake Machine Company in Baltimore. “There are jobs for the taking today. But kids don’t want them.”

“On TV, kids don’t see many positive images of manufacturing,” said Bill Mach, president of Mach Mold, a manufacturer of plastics molds in Benton Harbor, Mich. A show will have a scene with “an old dark building with a bird flying out of it, and something bad happens.”

Scott Paul, executive director of the Alliance for American Manufacturing, agreed. “Pop culture has a big impact on young people,” he said, adding that the only recent positive pop culture depiction of manufacturing that he can think of has been in Iron Man.

The industry needs an image boost, and young people need to get educated about high-skilled factory jobs, experts said.

An aspiring machinist — a popular factory job — can start training at 18 and then do a one- or two-year manufacturing apprenticeship. In five years, he or she could be making more than $50,000. In 10 years, that could double to $100,000.

“If you’re really good at your work, you could remain employed for a very long time, because there are so few of us,” said Sedlak.

Sedlak’s top worker makes $30 an hour. And annual pay at his company ranges between $70,000 and $80,000 with overtime. In 31 years, only three workers have retired from his factory.

Still, with almost 13 million unemployed Americans, including many high school graduates, he is struggling to fill positions.

A recent Manufacturing Institute and Deloitte report underscores that. Manufacturers currently have 600,000 vacancies nationwide, it said.

“When we pushed manufacturing out of the country, we pushed job opportunities out,” said Sedlak.

Last week, Justin Lavanway, 17, and two of his high school buddies, toured Mach Mold to learn more about manufacturing and its jobs.

States to manufacturers: We want you!

His grandfather was a career machinist with Whirlpool. “I saw that it was a pretty stable career for him,” said Lavanway. “That’s why I’m keeping my options open.”

But his friends, Joseph Johnson, 18, who is thinking about a job in medical services, and Charlie Leaf, 18, who wants pursue a career in psychiatry, are not interested in manufacturing.

“The public school system tells students that we have to go to college to be successful,” said Johnson. “Ever since you’re young, you hear that’s what you have to do to achieve the American dream.”

Mach hears this often from young people, even through manufacturing is a deep-rooted profession through generations of families in Southwest Michigan.

“There’s no easy answer to how we can change manufacturing’s image problem,” said Paul. Companies themselves have to be up to that challenge, he said.

One idea is to turn to pop culture, said Paul.

“Maybe we need someone cool like Clint Eastwood to say, ‘Go work in factories’ as a follow up to his Super Bowl Chrysler ad.”